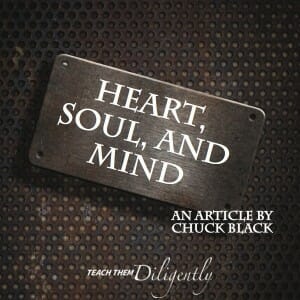 Jesus said that we should love God with all of our heart, soul, and  mind. How do we infuse such passion for God into our children? There was a point in my journey as a father when I felt the desperate challenge of not only making sure that my children understood what it meant to love God, but also of making sure that their love for God was genuine and deep. When I read of the wayward sons and daughters of countless fathers in the Bible, including the godly fathers, I became concerned. What could I possibly do differently than they? My desperation to make sure my children “got it” caused me to do some pretty strange things. One evening for family devotions I dressed up in my wife’s furry white robe, put a plastic sword through the belt, wore a band around my head and then dramatized how I thought an angel would have reacted to seeing Jesus suffer and hang on a cross for the sins of those who were mocking him. This was way beyond my normal MO (mode of operation), but I could not quench that burning desire in me to do whatever it took to reach my children with the profound life-changing truth of God’s great love for them. I ached for them to get a glimpse of who God was, of what He did to reconcile their sin-sick souls to Himself, and of His great plans for each of their lives. I had lived a decade of lukewarm Christianity, and I wanted so much more for my children…and my grandchildren should they ever come.

The hard part about having passion to serve God is that the world doesn’t like it. 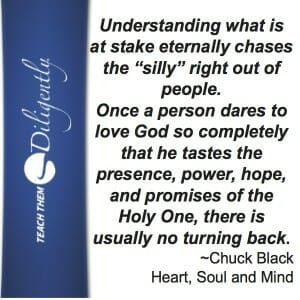 We shouldn’t be surprised because Jesus told us the world would hate us, despise us, and persecute us. That’s not something most teenagers sign up for. It’s not nearly as much fun as a youth trip to the water park or a video game night at the church. One day one of my sons said to me, “Dad you’ve ruined us!” “How is that?” I asked. With a solemn face he said, “I don’t like being with my friends when they are acting stupid and silly. You’ve made us too mature.” I smiled, relieved that my “ruining” was of this nature and said. “If you could, would you go back to being ignorant and silly just to enjoy your silly friends?” “No,” he replied. I explained to him that understanding what is at stake eternally chases the “silly” right out of people. Once a person dares to love God so completely that he tastes the presence, power, hope, and promises of the Holy One, there is usually no turning back. Although there are times when the cares of the world get in the way of loving God the way I should, I could never go back to being lukewarm in my love for Him again. There is too much life with Him…to much promise…to much joy. And without him, too much misery…too much self-pity…to much me!

God is waiting to love us back with great passion, and He does it so much better than we do.

2 Chronicles 16:9 says, “For the eyes of the Lord run to and fro throughout the whole earth, to shew himself strong in the behalf of them whose heart is perfect toward him.”

If you want to infuse passion for Jesus into your children, show them what life is like with Him and explain to them what life would be like without Him. Unfortunately we don’t have to look far to show them many of examples of lives without Jesus. Be real with God and with your children and as they mature, they will see their future in two distinct ways…with God and without Him. The choice is theirs, but it will be obvious.

My role as a father of children at home is nearing its close, and I thought perhaps my desperation for my children to catch God’s love would come to an end, but alas I was wrong. That same desperation, that same urgency, wells up inside me for anyone I encounter. I am currently coaching a high school basketball team and with each devotion I share, I am desperate once again for each boy to “get it”. I will never be free from it, and I shouldn’t be. It is our command…our commission to “go and preach and make disciples.” Let’s start with our children and end with the world shall we?

“Therefore go and make disciples of all nations, baptizing them in the name of the Father and of the Son and of the Holy Spirit, and teaching them to obey everything I have commanded you. And surely I am with you always, to the very end of the age.” Matthew 28:19-20

For a creative way to discuss living a passion filled faith with your child, you may want to consider reading, Sir Quinlan and the Swords of Valor, book five of The Knights of Arrethtrae series.

You will also want to make sure you read Mr. Black’s earlier articles, The Adventure of YES!, The Power of Fiction, A Heart of Rebellion, The Day The Rocket Didn’t Fly– A Lesson in Forgiveness,  The Uncomfortable Quest of Pursuing Truth, Spiritual Disorientation and the Beast of Doubt, and Escapism- New Lures for an Old Sin.