The Uncomfortable Quest of Pursuing Truth

There are many lies that I have believed at various times in my life. Some lies were told to me by a deceiver, and some lies I told myself because I wanted to be selfish. Andrea and I bought into the lie of the Yuppie generation culture and decided that we were not going to have any children because they would get in the way of our “successful” lives. By God’s grace he saved us from our own folly and in spite of ourselves blessed us with six children. As all parents know, it was the quickest lesson in unselfishness we ever had! God helped us see the lies of the culture and the truth He offers through the blessing of children. We must understand something about God…He holds truth in the highest regard, and He expects us to be pursuers of truth no matter how uncomfortable it is. Jesus identifies Himself and all that He is with ‘Truth’. He said, “I am the way the truth and the life”. The question we must ask ourselves often is, am I willing to be convinced of the truth and what will I do with it once I discover it? 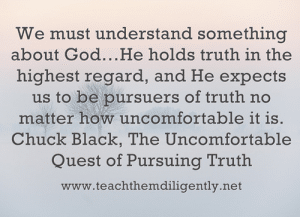 The pursuit of truth at all cost is a noble and courageous quest. I tried to capture the heart of such valiant pursuit through the main character of Sir Bentley and Holbrook Court. In this story, Bentley forsakes his position, his prestige, his wealth, and his livelihood to pursue truth…the truth about the one true Son of the King. Conversely, we find an example of one young man in the Bible that tried to pursue truth. When the rich young ruler came to Jesus in Matthew 19 asking what he needed to do to be saved, he was pursuing truth. Jesus gave him the answer, but the young man turned away. His quest to discover truth was successful, but he did not have the heart or the courage to take action. The love of money was too much for him to overcome. Reading about that encounter has profoundly affected me and my passion for following Christ. It has forced me to face my own idols and to answer the question, would I truly forsake all to follow Jesus? I wrote the story of Sir Bentley because it is my hope and prayer that I should be like him instead of the rich young ruler.

I was once an unwilling companion on a quest for truth. Many years ago my wife, Andrea, asked me to attend a homeschool conference in Columbia, South Carolina during the time that I was a young officer in the Air Force flying F-16 fighters. I was surrounded by “America’s best”…guys who had beautiful girlfriends and fast cars. I was already rather peculiar since I had three children and drove a minivan, and I certainly didn’t need another reason to be even more peculiar. Thinking about this strange notion of homeschooling our children and the invitation to the conference, I imagined a large room with nerdy people talking excitedly about different curriculum for two days straight. Although I finally acquiesced and agreed to attend, I was not an enthusiastic participant. But that all changed on the first day when I heard Gregg Harris speak on the consequences of faulty fatherhood by using Lot as an example. His message on godly fatherhood shook me to the core as truth slapped me in the face once again about my role and responsibility as a husband and a father. It was a turning point for me, Andrea, and our family as we embraced God’s call on our lives to homeschool our children. It wasn’t easy, following truth rarely is. Just as the rich young ruler had to give up something to follow Jesus, so must we if we are going to be honest and courageous about following truth.

Ironically, in spite of being so peculiar in a world of ‘Tom Cruise’ fighter pilots, the day I left the Air Force, my squadron gave me a farewell party. In the middle of the pilot lounge, surrounded by men who seemed full of confidence and answers, my flight commander came to me and said, “Chuck, I see how you live differently than most pilots and I need to ask you some questions.” Rob was a fighter pilot’s fighter pilot for he was a Desert Storm veteran and the F-16 demonstration pilot for the entire Air Force. For the next one and half hours, he asked me dozens of questions about God, the Bible, and Jesus Christ, and I was able to share with him “the reason for the hope that lies with me.” He was searching for truth.

Our children need to see that we will follow truth no matter the cost and no matter where it leads. Teaching this lesson to our children is paramount, for failing to do so breeds compromise and rationalization. Instill in your children that God’s Word is the ultimate source of truth, then act on it. When they see that pursuing truth is a priority, then sharing the truth with others will become automatic. This lost world is looking for answers, and we should find it impossible to stay silent.

“That we henceforth be no more children, tossed to and fro, and carried about with every wind of doctrine, by the sleight of men, and cunning craftiness, whereby they lie in wait to deceive; But speaking the truth in love, may grow up into him in all things, which is the head, even Christ.” Ephesians 4:14-15