The Power Of Fiction 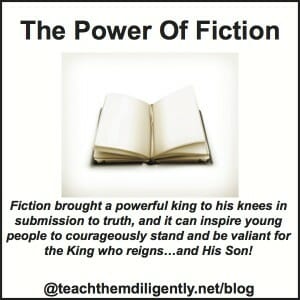 How powerful is a fictional story? A recent article by NBC proclaimed something that homeschooling parents knew all along: you are what you read. To quote NBC, “Researchers have found that when you lose yourself in a work of fiction, your behavior and thoughts can metamorphose to match those of your favorite character, according to the study published early online in the Journal of Personality and Social Psychology.”1 These secular researchers have stumbled onto a profound and biblical truth…there is power in story, even fictional stories—life changing power. For young minds growing and developing in the mire of media that tickles all of the senses, parents concerned about the spiritual growth of their children ought to take this truth to heart. Diligent parents must ask; what stories are forming the character and the very soul of my child? Who are they inspired to become like? And, who is the author that is inspiring them?

If stories, and in particular fictional stories can indeed change lives, and we are responsible and accountable for discipling and training soldiers for the kingdom, then we must not wink at the anti-biblical themes and ideologies that the culture is desiring to feed them and that oftentimes our children are desiring to feed upon. Through the power of fiction, our culture is forming a hedonistic paradigm and we must stand counter-culture like never before if we are to hold fast to the truth of God’s Holy Word. We must have the faith to say “No” to that which is not true, or honest, or pure, or lovely, or of good report so that God can say “Yes” to the blessings he has waiting for us and our families. Today’s books and movies reek of magic, witchcraft, sorcery, vampires, zombies, werewolves, horror, sensuality, perversion, and of heroes and heroines that just a few years ago would have been “the bad guys”. Aside from disconnecting completely from society and living as isolationists, eventually our children will be exposed to some of the enticements our culture offers through media, whether subtle or overt. Where it was unavoidable, I tried to teach our children to see through the smoke and mirrors and become intentional discerners of the Enemy’s agenda.

As a father of six children who were sometimes eager to partake of the media feast of the American culture, especially its tantalizing fiction, I began to wonder if fictional stories could be used instead to help spiritually train my children. Would God condone such a tool that was being used so effectively by His nemesis? Turning to God’s Word, I realized that Jesus used fictional stories throughout His ministry to teach deep truths, and He changed lives through them. The Lord then led me to Samuel where the prophet Nathan employed a fictional story of a rich man with many flocks and a poor man with one lamb. At the conclusion of this emotion-building story, David was convicted, broken, and repentant before God. Nathan’s clever use of allegorical fiction subtly prepared David’s heart for the crushing blow of truth. An effective allegory tends to impact most people that way. It is as though the picture of truth has quietly occupied the room of our heart and suddenly the curtains are thrown back to allow the brilliance of enlightenment to be revealed in an instant. Can fictional stories change lives? The answer is a resounding “Yes”. How lives are changed depends on the story. In my search for inspirational story with the power to change lives, God led me to pen the Kingdom Series and the Knights of Arrethtrae biblical allegories. They are no substitute for the life-changing power of God’s Holy Word, but for a few critical years during my children’s youth, I was able to reach into their hearts and minds in a way that my lectures never could.

Fiction brought a powerful king to his knees in submission to truth, and it can inspire young people to courageously stand and be valiant for the King who reigns…and His Son!