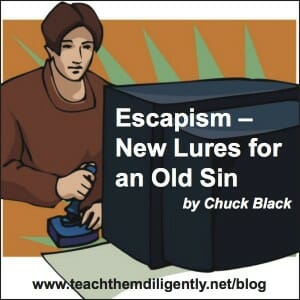 He was a bright young man with a promising future. With an ROTC scholarship and a lofty goal of becoming an officer in the United State Air Force, he had everything going for him. But then the video viper struck, sinking its venomous fangs deep into the veins of the young man, and it wouldn’t let go. Over the course of the next few months, the addiction to video games overtook him, and he could not stop. Before long, he lost his scholarship and was academically dismissed from the university. Another life wasted, another future robbed. Have you heard similar stories? I have…many times. Escapism is becoming epidemic. In fact, it nearly happened to our son when I let video games become too much of a part his life.

At first I rationalized the few video games I allowed into our home as a relaxing and even educational activity. But something kept nagging at my heart as I tried to manage the fighting and growing disrespect in our home. I began to see my motivated, creative thirteen-year-old son slowly slip into an attitude of apathy. For a time I ignored it, hoping that this “phase” would pass…but it didn’t.

One Sunday, I listened intently as the pastor preached a sermon on idols, and I was deeply convicted. The Lord showed me that I had an idol in my home that my son was worshiping. As I considered how to respond, I realized that in the Bible, God dealt with idols in only one way: He commanded his people to tear them down…completely! It was simple but very hard, and I resolved to obey. I shared my conviction with my wife, Andrea, and she was not very happy about it. All of our son’s friends had games and we were already peculiar enough. Further, our son had spent a lot of money on these games. She was not convinced, but ironically, the next day I came upon a conversation between her and our son as she was tenderly revealing how video games had become an idol to him. I explained to Reese that we loved him too much to let him waste his young life on an activity that could ruin him and his future. Even at thirteen Reese was a tough, athletic, somewhat stoic young man, but tears began to spill down his cheeks. I carefully pointed out that those tears showed just how serious the problem had become.
After praying with Reese, I bought back from him all of the video games he had purchased in the last six months. Taking the wise council of my wife, we also purchased shop tools and other creative diversions to fill the gap in his life. The first two weeks were not easy, and I began to wonder if I had made the right decision, but slowly our home began to transform and so did Reese. My eyes fill with tears as I think of it now, for that young man has matured into a man better than myself. His walk with the Lord was rejuvenated and his creativity and passion for life returned. He built from scratch models of ships, an electric guitar, chainmail, helmets, swords, a robotic arm and a host of other marvelous projects. We had our son back!

The technology of today has the power to lure people of all ages into a world of escapism that is often more appealing than reality…a world that robs them of their potential and the Lord of His return on His investment in us. In the days before such audio and visually stimulating technology, escapism usually took on the form of alcohol and drugs, but today the new lure of escapism comes in the form of video games, romance novels, and social media to name a few. Parents must now be on guard twenty-four-seven like never before because all of these forms of escapism are instantly available and socially acceptable everywhere. The problem is that our young ones usually do not have the maturity to deal with such vivid pressures that lure the senses. That’s our job and it often makes us look like prudish killjoys, but I want to encourage you to have the courage to do it anyway. Your children need you to, and if they grow up to be the mature people you are praying and training them to be, they will thank you. The precious minutes that God grants your gifted children should not be wasted pining away for the perfect man, rearranging electrons on a computer screen, or posting and reading gibberish that bears zero fruit. Our God is a jealous God…jealous of the time and talent He has invested in each of His beloved children.
“See then that ye walk circumspectly, not as fools, but as wise, redeeming the time because the days are evil. Wherefore be ye not unwise, but understanding what the will of the Lord is.” Ephesians 5:15-17
For a creative way to discuss escapism with your child, you may want to consider reading, Lady Carliss and the Waters of Moorue, book four of The Knights of Arrethtrae series.