Truth and Education: The inseparable combination

As a Christian today in American society, you will hear many conflicting opinions, see a great deal of illogical debate, and will even witness a great deal of very disturbing behavior. Given America’s foundation, this puzzles many of us.

Indeed, most Americans are completely ignorant of our heritage, and the vast majority are unaware of the long-term role played by American education.

It isn’t even particularly just government education, that is bringing the changes we are seeing. The increasing atheism, humanism, and hedonism is permeating private and homeschooling via the so-called “Common Core State Standards,” and other such programs. 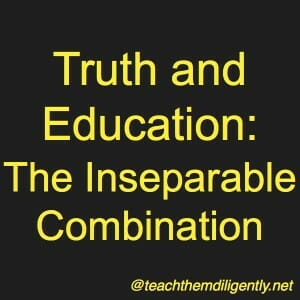 After nearly 30 years of research in this arena, my primary wonder is that there are still so many Americans who know ANY of the foundations of our nation, and some who still love this country.

I credit the comparatively small number of homeschooled, and private schooled children, and the diligent efforts of some other good parents across America whose children may not have been blessed by alternative education.  These parents have worked very hard, against considerable opposition, to correct and repair what their children were being taught  – and to provide what they were not receiving – in public or private school curriculum and instruction.

What even these parents often miss are the shortcomings and flaws in their own education and thinking. Did not most homeschool parents attend public schools for at least part of their education?  Most parents, grandparents, even great grandparents, attended public schools in part or in whole. And most of us — with few exceptions — generally accepted way too much of what we were being taught. We rarely questioned the cleverly if thinly disguised Darwinist, Humanist, or even Socialist propaganda that has masqueraded as education, nor have we contested most of the liberal or atheist agenda of teachers in the public education system itself. This is a fatal flaw.  We now live in a nation full of the people who have been marinated in this system and all it’s dangerous stew of untruth.

We didn’t ask the simplest questions, “Who is really running this operation, what is their motivation, what are their ultimate goals?” Perhaps we or our parents and grandparents found the educational content only mildly objectionable — without understanding either how completely objectionable it really was. We have ignored or acquiesced to the agenda behind public education that has become so clear now in 2013. Our nation has been thoroughly marinated in untruth.

Of course, as objectionable as public education may have been when your parents, or you were in school, it is even worse today. The government schools, after all, are increasingly taking their cue from the national education establishment, which consistently uses the schools to remake the country along socialistic and atheistic lines by remolding the minds of students, blatantly in some cases, subtly in others.

Year after year, the vast majority of students who graduate from high school do so after having spent 12 or 13 years in public schools. Considering the countless thousands of hours involved, the propaganda has had an astounding effect, even in cases where good parents, even Christian parents, of public school children do their best to un-teach what their kids are getting in the classroom, and teach the all important things that are NOT taught.

Of course, the propaganda from K to 12 is cumulative, with lies and deception being built on other lies and deception. It is not an overstatement, in fact, to say that those who go through the public school system become the public school “change agents” experimental “frogs in the water.”  How many of the children of professing Christian homes are walking away from the faith… or walking into “Christianity Light?”

Most have heard the proverbial story of a frog being heated in water. According to this traditional account, a frog, when put in cold water, is quite at home. When the water is then heated very slowly, almost imperceptibly, over a considerable span of time, the frog remains quite docile, comfortable in fact, until ultimately, it meets its end. As the temperature reaches fatal levels, sadly, the frog never realizes how the slow changes in temperature are leading to its death.

How Harmful Has Public Education Been?

How harmful has public education been? How much recovery is needed? The answer should be self-evident. Look in any direction.  Societally, politically, in every arena, America is in moral and political decline — and if the present trajectory continues unabated the end point will clearly be an atheistic and brutal tyranny.

It is difficult to deny that a growing and expanding dependency class. Many have lost or perhaps never even possessed a personal, moral compass. These are now contributing to this decline through their own actions and votes, without even realizing that they are contributing to their own destruction.

Just as obviously, public school propaganda and failure is not wholly responsible for the ongoing radical transformation of America. Most certainly entertainment and media have played a large part, and the failure of churches and parents in general is also a major factor. But just as obviously, public education is a huge contributing factor.

Glaring manifestations of the moral and political dumbing down of the American people include the large number of our fellow citizens who are without faith,  and who find nothing wrong with immoral actions such as abortion and aberrant sexuality, theft, and entitlement attitudes.  But that does not excuse the fact that Christians as well, have been heavily impacted by the concerted dumbing down of America, historically, economically, societally, even morally.

Ask a Christian under 30, even under 40, if the U.S. government is a democracy or republic and you will have some proof. Ask them if they believe in a literal Creation, or if they can defend their position with authority.  Ask if they are “pro life” and if they’ve ever defended THAT position.

Ask them Ask them if they can name the six men — yes, just six — who signed both the Declaration of Independence and the U.S. Constitution and you will have another clue.  Inquire if they know who was the one of these six men first appointed to the Supreme Court by George Washington, and you begin to see the pattern. Why is this piece of information so important?  Many of those I’ve asked have called it “trivia” and scoffed at the value.

Perhaps if these boys and girls, men and women, knew Signer and Supreme Court Associate Justice James Wilson’s once-famous speech on the “Four Species of Law” that he delivered while professor of Law at the prestigious College of Law at the College of Philadelphia. Perhaps then, they would have more understanding about the blatant falsehood of the loud cries of the liberals today to de-Christianize America under the so-called “separation of church and state” doctrines.

It’s time we taught them the truth about our American heritage. That is why FreedomProject Education has been constructed, equipped and is ready to do just that. It is why we offer our Americanist Summer Camp, Camp Freedom, every June. And it is part of the responsibility of defending, and distributing truth that every American should share.