One of the most important lessons I learned during my first year of marriage is that my wife and I can interpret the very same thing very differently. Sometimes this results in a shared joke, as in what “running late” means or how many books are too many for our overburdened shelves. (I think the idea of “too many books” exists only in theory.) But the truth is that we often see a shared experience differently because we come to it with different dispositions, backgrounds, personality types, love languages, or learning styles.

This dynamic is not unique to my marriage. All of us typically focus on certain parts of reality while overlooking others, often leaving us with a skewed, limited, and maybe even false interpretation of people and events. Consider how we tend to think of Jesus Christ. 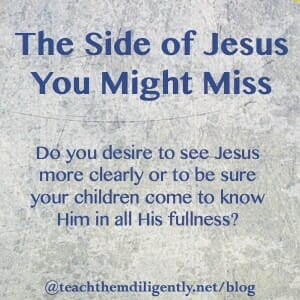 My pastor occasionally refers to people in ministry as priests, prophets, or kings. The “priests” are those who gravitate toward serving in caregiving, nurturing, and supportive roles. These are the folks who first to think to cook a casserole for a neighbor or step forward to make newcomers welcome. The “prophets” call the people to Bible study, deeper commitment, and taking a bold stand for the truth. “Kings” tend to delegate and manage teams, motivate and inspire, and direct projects to completion. Each of these ministries adds tremendously to a church, and the church would truly suffer if one of them were absent.

When we think of Jesus, most of us can readily identify how He exemplifies the prophet, priest, and king, but each of us tends to see Him more clearly in one role before the other two. If you personally relate to Jesus in terms of His tenderness as a gentle caregiver, healer, and comforter, you may find it harder to relate to the Christ of Revelation 19 who leads an army to war. Or if you are deeply moved by Jesus’ calls for repentance and wholehearted devotion, you may find it more difficult to comprehend His tenderness toward Judas on the night of his betrayal or toward Peter after he denied Christ.

It’s not unusual that we miss a side of Jesus when we read the Word or when we pray, worship, and live. Yet it’s vital that we come to know our Lord and Savior in all His aspects. If you have trouble relating to this passage by Scottish theologian James Stewart, you have some adjusting to do:

If you need to see Jesus more clearly, or you want to be sure your children to know Him in all His fullness, take a few moments and read John 10:1–21 again. Consider how this passage speaks of who Jesus was and is. See how He is specifically revealed in the passage as prophet, priest, and king.

Throughout His time on earth, Jesus often caught people off guard. Nicodemus the Pharisee, who sought Jesus out under cover of night, was a teacher of Israel; yet he marveled as Christ revealed Himself through the Scriptures. John the Baptist heralded the coming of Christ, yet his own followers would later be taken aback by Jesus’ methods of ministry. These people met Jesus face to face, so is it any wonder that we, too, should be taken by surprise when He catches us off guard?

In “The Weight of Glory,” C. S. Lewis compared modern Christians to “an ignorant child who wants to go on making mud pies in a slum because he cannot imagine what is meant by the offer of a holiday at the sea. We are far too easily pleased.” Don’t be satisfied with knowing Jesus Christ mainly as prophet or priest or king. Don’t settle for less than “the surpassing worth of knowing Christ Jesus” in all His fullness and glory (Philippians 3:8). He promises that if you seek Him, you will find Him (Luke 11:9).