Gifts of Hope for Filipino Children 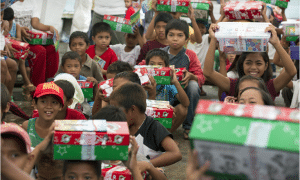 Andrew James is a staff member in the Samaritan’s Purse Bolivia office. Recently, he joined our disaster response team in the Philippines and has been working with food distribution for Typhoon Haiyan survivors.

The Filipino people were warned there was a massive typhoon heading their way. The government issued several announcements warning the population to prepare for the worst.

But typhoons are so common in the Philippines that no one thought much of the dire warnings. When they heard the announcement, 17-year-old Shaira Abraham and her family simply went to the school evacuation center to find shelter from the storm.

When the wind from what would become one of the world’s most powerful storms ever began to pick up, everyone realized this typhoon would be different. Feeling the responsibility to prepare others for eternity, Shaira’s family began sharing the Gospel with the four other families sharing their room.

All of the sudden, water began rushing into the school at a tremendous speed.

“When I saw all the water, I began to worry,” Shaira said. “We were trapped in the four corners of the class and had nowhere to escape. In a few minutes, we would all be dead. The first thing that came to my mind was God’s promise never again to destroy the entire world by a flood. I called out to God and asked Him to remember His promise.”

At that moment, the force of the water snapped a tree standing next to the school. It crashed through the roof and broke down the wall. The slanted tree provided a ladder to flee from the rising water.

Someone shouted that the couple had left their baby. Shaira began to climb down to rescue the infant, but others told her not to risk her life – the child was most likely dead. Despite their words and her inability to swim, Shaira climbed down the trunk and began looking for the baby in the water. By God’s grace, she was able to grab her and pull her up. The baby was saved.

All four families remained on the tree for several hours as they waited for the storm to pass and the waters to recede. All of them survived. People staying in other parts of the school were not as fortunate. All of the people in the classroom next door drowned.

Even though she survived, Shaira lost almost everything she held dear that day. The storm destroyed her house, killed her best friend, and took away her father’s job. The Abraham family had nowhere to live and no way of making a living. It was a dark moment in their lives.

For days after the storm, Shaira cried herself to sleep. She had so many questions in her head. “What would I do if my parents had died? How would I have taken care of my brothers? Why did this happen? Why did God allow this?”

She fell into a depression she could not escape. Finally, she received counseling from a Christian doctor who helped her through the crisis and gave her hope.

An Encouragement for Others

I met Shaira at an Operation Christmas Child distribution in the Philippines. Every year, thousands of churches in the U.S., Canada, and other parts of the world pack millions of shoeboxes full of candies, toys, and other goods to impoverished children around the globe. This year, Samaritan’s Purse sent a cargo plane full of about 65,000 shoeboxes to the Philippines to encourage children affected by Typhoon Haiyan, with close to another 450,000 on the way.

Shaira assisted in distributing boxes to these traumatized children.

“I have received so much help in the last few days, I am so thankful,” she said. “Now I want to be an encouragement for others who are going through a difficult time.”

I felt so humbled after hearing her story. Shaira had so many reasons to be bitter and resentful. But here she was, forgetting her own grief to love others.

At one of the churches, Pastor Jerry Tanawan said that people asked him how they could help in the days following the storm. He thought it would be nice to give the children a gift to encourage them.

“During the storm, children suffered the most,” Tanawan said. “They were so scared; so traumatized; so depressed. Some were so affected that they continue to panic every time they see the ocean.”

But because of the financial situation, he didn’t think it would be possible. Then God provided through the shoebox gifts.

At each of the distributions, local pastors give children a message of hope through the Gospel of Jesus Christ.

“I saw a sign on the street that said: ‘We may be homeless, we may be roofless, but we are not hopeless,’” said Kent Wong, an Operation Christmas Child liaison in the Philippines. “For those of us who trust in Jesus Christ, there is hope no matter what.”

Most of the children who come to the distributions do not attend church. For many of them, it is the first time they hear a clear Gospel presentation.

“Thank you for coming”, said one of the mothers at a distribution. “It is really difficult to acquire gifts this year. We have lost everything. This is most likely the only gift they will receive this year. Thank you for remembering our children”.

“Many of us pack a box, pray over it, and forget about it until next year,” Wong said. “But for the children receiving these boxes, it is something they’ll never forget. We need to remember to keep praying for them”.