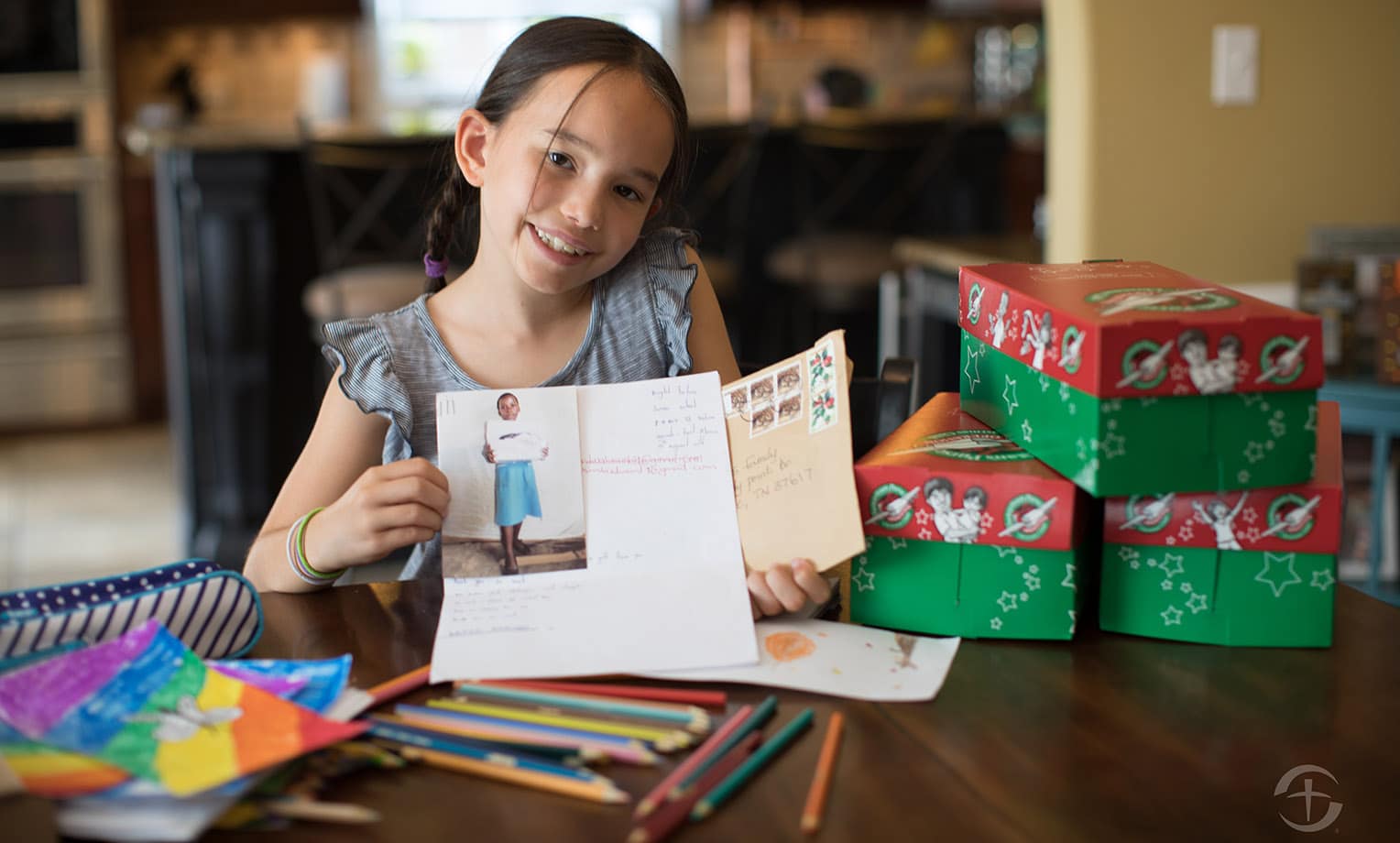 The initiative of an 8-year-old in Tennessee increases her family’s Operation Christmas Child goal tenfold.

The Hughes family used to pack three shoeboxes a year, but this year they are planning to do at least 30. Their oldest daughter, Lily, 8, is selling custom drawings to friends and family to raise money to pack and send shoebox gifts to children in need around the world.

“I really like whenever I can help others. It seems really sad that people don’t have anything,” Lily said.

It Started with a Letter

Lily was so concerned about the children who don’t receive shoebox gifts that in May 2016, she began pestering her mom Nicole to do more than their usual three.

Busy with the demands of work and caring for three young children (Lily, Reese, 4, and Levi, 2), Nicole resisted her daughter’s persistent pleas for three months. But at the end of an August day, they stopped to pick up their mail and were surprised by a large brown envelope with postage from Uganda.

Excited, they opened it to find a four-page illustrated letter from a girl named Margaret, age 10. She had received a shoebox gift packed by the Hughes family the previous year.

“I love Jesus,” Margaret wrote. “I was very happy when I received a gift from you. Thank you so much. My father struggles so much in paying my school fees. Keep on praying for me…Thank you for being my friend.”

Moved by the letter, Nicole relented to Lily’s requests and brainstormed with her how they could raise money to pack more.

Art and Advertising Take Off

Knowing that Lily was artistic, Nicole suggested that she and Reese sell paintings. The girls got to work, created a collection, and asked their mother to make a video of them advertising their work for $3 each.

Nicole posted it on Facebook. She thought maybe their grandmother and a few others would buy a painting, and they’d be able to pack five boxes instead of just three. But to everyone’s surprise, friends from across the country began placing special orders.

Lily also wrote a letter asking for shoebox items, and friends responded by bringing them toys, school supplies, and hygiene items to include in their boxes.

Lily’s favorite things to pack in shoeboxes are outfits and soccer balls. She packs the latter because it can be a gift for the whole community. She is always concerned that some of the siblings in a family might not receive a shoebox gift so she packs extras of many items in each box.

Lily’s commitment is impressive. “It’s all Lily,” Nicole said. “She packed the shoeboxes and sorted everything.”

Nicole added: “She stuck with it even when the novelty wore off. She said, ‘I’m going to do this,’ and missed playdates because of it.”

Operation Christmas Child is now a long-term project for the 8-year-old. Lily is committed to increasing her shoebox packing total by five boxes every year. Last year, she sold paintings, this year it’s drawings, and next year she hopes to do clay art for her friends and family who support the project.

And all of this is happening in a home full of all the challenges that come with raising young children.

“There is never a perfect time to help or volunteer,” Nicole said. “Life is always crazy, and if you wait until the perfect moment, that will never come. I am fortunate that Lily refused to allow our family to make excuses.”

Operation Christmas Child is a great way for homeschooling families to get involved with sending shoebox gifts and the Gospel of Jesus Christ to children around the world.

National Collection Week is November 16-23. Homeschool families can help bring Good News and great joy to a child in need by packing a shoebox at home or building a shoebox online.

Note: This article was originally published in 2017. Lily has written Margaret back and hopes to send her another dress and school supplies. Tragically, though, Lily’s little brother Levi passed away after this article was written.

Did you know that you can pack a shoebox online? Click Here to pack and send a shoebox without having to leave your home.