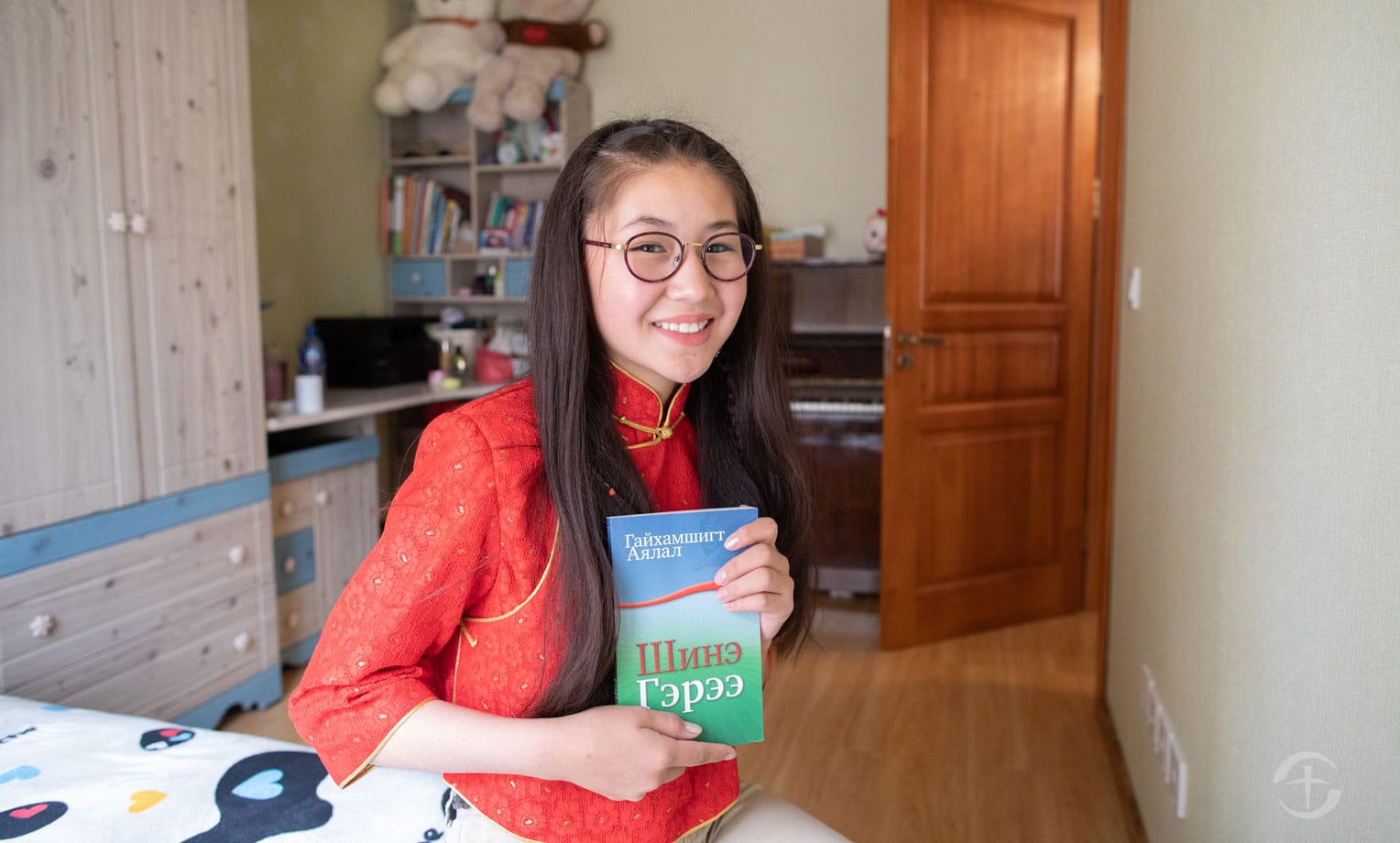 After 13-year-old Dariya received an Operation Christmas Child shoebox gift and attended The Greatest Journey discipleship course, her relationship with God was strengthened. What she did later with her shoebox was truly surprising.

When Dariya, 13, of Ulaanbaatar, Mongolia, received an Operation Christmas Child shoebox gift in February, it interrupted her life with joy.

‘They Told Us About Jesus’

Dariya lives in an apartment in the Mongolian capital with her grandmother, Bebe Bakhpit, and 10-year-old cousin, Hannah. Her parents are divorced, and her mother works in South Korea—often gone for up to a year at a time.

“I miss my mom when she’s in Korea,” Dariya said. “Sometimes I call my mom and I share what’s on my heart and sometimes I cry.”

But the day she received her Operation Christmas Child shoebox gift was a particularly bright spot for her.

“They told us about Jesus,” Dariya explained. She had become a Christian in 2016, but the outreach event sponsored by a local church in 2018 helped her understand more about the God she’d committed to serve.

In addition to hearing again the Gospel of Jesus Christ, that day she also learned, “Man is God’s great creation.” Living in a country where unspoiled natural beauty is revered and often elevated to the point of worship, she was encouraged to learn that humanity was the pinnacle of God’s work at the beginning of the world. Dariya said she also learned, “Children are important.” These truths spoke to her about her value to the God of the universe.

After the teaching, the children were surprised with gift-filled shoeboxes. Dariya was the last in the room to receive one of the precious boxes, but she treasured hers in multicolored wrapping paper.

“I was very excited when I opened my shoebox,” Dariya said. Inside she found a hat, scarf, sketchbook, colored pens, two pencils with an eraser and a sharpener, and her favorite—a letter.

“Everyone was excited to see what was in each other’s shoeboxes,” Dariya said, remembering that every box was so different.

News Too Good to Keep to Herself

The next time Dariya called her mom in Korea, she could hardly contain the news. Her mother, Saraa Bebe, remembers the day well: “Dariya said, ‘There’s an exciting thing that happened to me! I got a shoebox and there was a letter for me. This was my first letter.’”

The letter simply read, “Greetings! I hope you love this gift. God bless you,” but the words penned especially for her made a strong impression on Dariya.

During that same phone call, Dariya also asked her mother if she could participate in The Greatest Journey discipleship classes that were beginning at the church soon.

“Her exams were quite close,” Saraa explained. “I wanted her to concentrate on her studies, but Dariya was so excited and had such a passion to attend The Greatest Journey that I allowed her to go.”

At these classes joined by other shoebox recipients, Dariya learned more about God and how to share him with others.

“Because I attended the 12 lessons of The Greatest Journey, I am changed,” Dariya said. “I developed more of a relationship with God.”

She cites a range of evidence of how God has worked in her life through this course.

“Before I wasted my time a lot just searching on my mobile phone and didn’t keep my room tidy,” Dariya said. “After The Greatest Journey, I keep my room tidy and spend more time with [cousin] Hannah.”

In addition, about a month or so after she received her shoebox, Dariya began keeping a prayer journal.

“I write in my prayer book every day—sometimes in the morning, sometimes in the evening,” she said. Dariya explained that she writes her prayers instead of saying them so she can remember what she has asked of God.

Dariya is also copying Scripture into a notebook to help her remember it. She’s already written out the book of Proverbs.

Dariya’s grandmother, who is a Christian, said she sees “a bigger heart” in her granddaughter, and the shoebox gift “really strengthened her faith in God.”

Giving Away Her Shoebox

In addition to growing her own personal walk with the Lord, Dariya is applying lessons she learned in The Greatest Journey about sharing her faith. She’s starting with her father who is the only person in her family who is not a believer.

“I prepared a present for my father’s birthday, and I used my shoebox,” Dariya said.

Her father came to her grandmother’s home to receive the present. He didn’t open it at first, but after Dariya insisted, he untied the ribbons she had carefully decorated it with to find a dark red shirt.

“He was excited to receive a gift from me,” Dariya said. Although she didn’t see immediate improvement in her relationship with her father through this, she continues to build bridges and desires to share the Gospel with him.

“I want to be like the girl who gave me a shoebox,” Dariya said. “I want to help a lot of people believe in God.”

Since 1993, Operation Christmas Child, a project of Samaritan’s Purse, has partnered with local churches in more than 150 countries to distribute gifts to boys and girls in need and tell them about God’s Greatest Gift—Jesus Christ. Homeschool families can join in this exciting project by packing a shoebox at home or online. National Collection Week will be Nov. 16-23, 2020!

Did you know that you can pack a shoebox online? Click HERE to pack and send a shoebox without having to leave your home.