“That’s An Exception!” The Source of Struggling Readers and Spellers 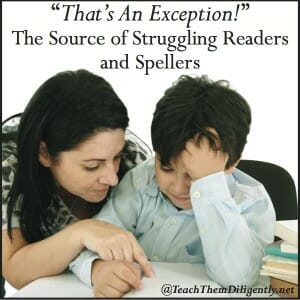 Many students and teachers are overwhelmed by the seemingly numerous “exceptions” in English.

For example, why isn’t there a long A sound in have?

Many phonics and spelling programs have lists of “sight words” to memorize that appear to be as long as the lists of rule followers. And to make matters worse, as a culture, most people quickly answer “that is an exception” to students’ common questions about English spelling. Yet when students ask questions about science to which we don’t know the answer, we would never tell them that it is an exception to the laws of physics. Rather we would say, “I do not know, but I will look it up.”

This culture of exceptions creates tremendous confusion for logical and literal minded students as they learn to read and spell. Sadly, when children experience repeated difficulty learning to read, they often internalize that they are not smart and develop a lifelong aversion to reading.

In the United States approximately one-third of children read well, one-third are struggling, and one-third are functionally illiterate. In my observation, this rule of thirds is also present in the homeschool community. One child appears to teach herself to read, another in the same family struggles but makes progress, and for another child reading seems to elude him despite lots of practice.

Often parents tell struggling readers to try harder, and they require more sessions of “torture reading” together, where the student incorrectly sounds out words that the teacher insists are “exceptions” and must be memorized.

Fortunately, there is an easier and much less frustrating way to improve any child’s reading and spelling proficiency.

Teach All the Sounds.

Many letters say more than one sound. For example, the letter S says /s/ as in sad and /z/ as in is. Many students misread words simply because they do not know all the sounds. To hear the sounds for all 74 phonograms see www.logicofenglish.com/resources/phonogram-list.

Many people only know one reason for a silent final E: the vowel says its name because of the E. This rule explains 50% of silent final E’s and is useful for reading and spelling words such as game and ripe. However, if this is the only rule you teach, most students will initially misread have and give with a long vowel sound. The second most common reason for a silent E is: English words do not end in V or U; therefore add a silent final E. Knowing all nine reason will provide students with a more complete understand of English, aid them with spelling, and prevent them from needing to memorize by rote tens of thousands of words ending in a silent final E.

Many students guess wildly while reading because they’ve never realized that all words are made of various combinations of the 45 sounds of English glued together. Many students who have been taught phonics, but who are then told that a high percentage of words are “exceptions,” are confused about whether the markings on the page are about words or sounds. Put away the books and practice saying words aloud with a space between each sound (h-a-t) (e-l-e-ph-a-n-t). Then ask the child to glue the word back together.

Struggling readers who do not know the 74 phonograms and 30 spelling rules which unlock 98% of English words consider reading aloud akin to torture. Rather than continuing in the same manner, take a short break from requiring the student to read aloud and teach the student the phonograms and rules. Once students have mastered these tools, you can again assign books to read. When a student misses a word, you will now have a logical explanation for how to decode it.

Reading should be the priority of every school day for all non-readers over six years old. Studies have shown that with as little as 80 hours of systematic reading instruction (learning the phonograms and rules), most students will make dramatic improvements. If needed, set aside other coursework for six to eight weeks until your student has mastered reading.

Too often we answer questions about reading by saying, “That is an exception.” This frustrates many bright students and discourages them from reading. Rather than dismissing words as exceptions, look for answers and explanations. English is far more logical than you might think.

Answers to questions about English reading and spelling can be found in “Uncovering the Logic of English” and by visiting www.logicofenglish.com.  You can also post your questions for Denise in the comments below.  She has graciously agreed to come over and answer your questions right there! 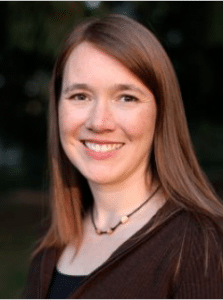 Denise Eide is the author of the award winning book Uncovering the Logic of English, Doodling Dragons: An ABC of Sounds, and the Logic of English® series of curriculum. Denise will be speaking at each of the Teach Them Diligently Conventions in May 2013.  You will not want to miss the opportunity to hear her in person and take a good look at her Logic of English curriculum for your homeschool.