Spiritual Disorientation and the Beast of Doubt

Over the past few years, I was given the privilege of mentoring an outstanding young man who has shown a consistent commitment to honor the Lord and grow in his relationship with Christ. At one point he began to encounter an onslaught of spiritual attacks because he was facing a major life-changing and kingdom-building event. The attacks came in the form of doubt…doubt primarily about truth and salvation. In the middle of the night, alone, and away from home, he could feel the presence of darkness pressing in upon him and the foundation he was standing on seemed to shake. 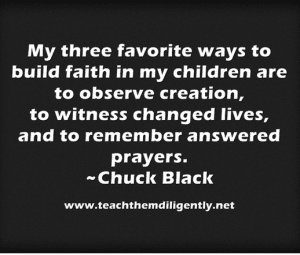 It is critical that we prepare our children for the challenges that they will face regarding spiritual attacks from the evil one. As Ephesians 6:16 says, it is the shield of faith that will quench all of the fiery darts of the wicked. Therefore, we need to continually find ways to build the faith of our children. My three favorite ways to build faith in my children are to observe creation, to witness changed lives, and to remember answered prayers. Scripture supports this in Romans 1:20, 2 Corinthians 5:17, and Matthew 21:22. One of Satan’s common attacks against a young Christian is doubt, for once they leave the protection of a Christian home, the fiery darts of worldly intellectualism, political correctness, and spiritual diversity will bombard their minds which may cause them to question everything you’ve taught them. Bible knowledge alone is not enough to withstand these attacks for only the shield of faith can protect them at this critical juncture in life. We must daily find ways to build their faith. Take God-walks into the country, invite a radically converted Christian over for supper and talk about the transforming power of Jesus Christ, and show them how God has touched your life by His answering specific prayers.

For my young friend, working through this episode of doubt took many days of prayer and counsel. The Lord gave me a simple story to share that helped him through. On one of my earlier flights in the F-16, I was a wingman flying close formation with my flight lead who was a much more experienced pilot than I. Close formation means that our wingtips were three feet apart, and we were flying at 480 miles per hour. We were ascending up into a cloud cover that was much thicker than I had anticipated. As we entered the clouds, I was close enough to my flight lead to keep in formation as he began to lead us up to clear skies. In our ground training, our instructors warned us about something called “spatial disorientation.” This is a strange effect that nearly every pilot that has flown in weather experiences. We have semicircular canals in our inner ear that tell us what our orientation to the earth is and give us a sense of balance. In an aircraft, the visual cues of the horizon help keep our inner ear oriented. Once we lose sight of the horizon, the motion of the aircraft can cause our inner ears to falter and we then become “spatially disoriented” thinking that up is down or left is right. In such cases, a trained pilot recognizes the situation by monitoring and relying upon the instruments of the aircraft. However, the feeling is often so powerful and overwhelming that pilots cannot overcome what their inner ears are telling them and end up losing control of the aircraft and crashing…which is bad. Hearing about spatial disorientation and then experiencing it are worlds apart. On this mission, I began to experience severe spatial disorientation while flying just off the wing of my flight lead. After a few minutes in the clouds, I felt as though my jet was ninety degrees to the horizon and we were plummeting to the earth. The feeling was so powerful that I could hardly make myself stay where I knew I needed to be, right on my flight lead’s wing. I quickly checked my instruments and they confirmed that my jet was straight and level. I had to trust my flight lead in spite of the overwhelming doubt that I was experiencing. After a few more minutes of battling spatial disorientation, we broke through the clouds and our jets were perfectly level with the earth. My inner ear immediately recalibrated and I felt great relief. It was a sobering realization to know that if I had trusted myself and not my flight lead and the instruments, I would probably have crashed and died that day.

After sharing this story with my young Christian friend, I explained that there are times when we can become “spiritually disoriented”, especially as a young believer facing stormy times. During these times, Satan will attack and it is important that we trust our flight lead, Jesus Christ, and our instruments, God’s Holy Word, to see us through. Our faith must stand solidly upon the foundation of Jesus, the chief cornerstone as described in Ephesians 2:20 and upon the pillar of truth, the Bible. Faith like love is not based on our feelings; it is a choice. Even in times of doubt we can choose to believe and know that just beyond the clouds of doubt is a clear blue horizon waiting for us to journey towards.

If you are looking for a unique way to talk about doubt with your children, you might consider reading Sir Dalton and the Shadow Heart, an allegorical story of one young man who faced the beast of doubt and overcame it through his faith in the Prince.

“Above all, taking the shield of faith, wherewith ye shall be able to quench all the fiery darts of the wicked.” Ephesians 6:16

You will also want to make sure you read Mr. Black’s earlier articles, The Adventure of YES!, The Power of Fiction, A Heart of Rebellion, The Day The Rocket Didn’t Fly– A Lesson in Forgiveness, and The Uncomfortable Quest of Pursuing Truth.