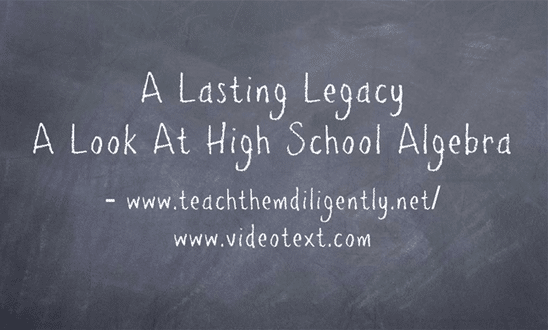 A Look at High School Algebra

The word “legacy” comes from the Latin “legare”, meaning “to bequeath”. Of course, that generally brings to our minds, an inheritance, in the form of money, or property. As parents, I am sure we will be bequeathing something to our children. Will it be of any more value than the material goods we have acquired? While it may be somewhat narrow in perspective, here is something else to consider.

A legacy can mean many things, but helping our children learn to think, may be one of the more long-lasting tools we can bequeath to our children. Of course, we need to carefully consider the educational materials we use to teach our children, and those materials need to be developed “logically”. Unfortunately, traditional Mathematics instruction is often driven by programs which are developed “topically”, instead of logically.

The following article, regarding the traditional scope and sequence of Algebra, was written with that in mind. I trust it will give you food for thought, as you strive to leave an educational legacy to your child.

Such a simple question! But is the answer that obvious? Not when it comes to high school Algebra! And I’m not talking about some new way to add algebraic fractions. I’m referring to the age-old practice of teaching two years of Algebra in high school which, presumably, make up a complete course in Algebra. They may have been called Algebra 1 and 2, or they may have been called Beginning Algebra and Advanced Algebra. In either case, the implication was that each comprised one-half of a complete Algebra course. However, if you look at the table of contents in any “2nd year Algebra” book, you will find that at least 50% of the book is a repeat of “1st year Algebra”.
So really, there are “no such things” as Algebra 1 and Algebra 2. These are courses (or names for courses) which came about as a result of school scheduling. Many years ago, when it was the norm to require only 2 high school math credits to graduate from high school, a study of Algebra was a natural beginning credit. Of course, since it was generally taught “mechanically”, utilizing many formulas and rules, a lot of practice and repetition was involved and, in fact, the study was not even completed in one year. So, for another math credit, Geometry was taught for a year. It was considered “another discipline”, involving a significant amount of logical reasoning and proof, and it gave students “another math experience”. That took care of the required credits.

Then, the next year, students interested in going further in their study of mathematics were offered the opportunity to continue, and finish, their study of Algebra. Of course, because of the “procedural” way it was taught initially, students simply didn’t remember much of that first year. So, they started over, re-studying many of the same things.

This time however, it was called “Advanced Algebra”. Something of a contradiction, don’t you think? In fact, the word “advanced” is a relative term anyway. Chapter 2 of an Algebra book is “advanced”, compared to Chapter 1, isn’t it?

This has been perpetuated through the years, primarily because of that traditional implementation. When you try to memorize rules, formulas, tricks, and shortcuts, without really knowing “why” they work, it will take a lot of drill and review, just to remember the material for a test. Yet, even today, that approach is often considered to be the “normal way” to teach Algebra.

Therefore, I would suggest to you that one of the most fragmenting things we have done in mathematics education is to “forcibly insert” a Geometry course into the middle of an Algebra course. Algebra is a single course, a “complete” course, divided only by concept areas. It is the study of RELATIONS (equations and inequalities), and it develops by DEGREES (as defined by the exponents). It begins, very logically, with a study of FIRST-DEGREE relations (all of the exponents are “1”), and continues to develop by exploring other types of exponents. Included are HIGHER-ORDER relations (with integer exponents), RATIONAL-DEGREE relations (with fractions as exponents), and LITERAL-DEGREE relations (when the exponents are variables, or “letters”). As such, Algebra is the basic language of ALL upper level mathematics courses, including Geometry. Not only is Geometry NOT a prerequisite for Advanced Algebra (whatever that is supposed to be), but you really need a good understanding of Algebra, as a complete course, before you can fully understand a complete Geometry course. That means there is a “disadvantage”, from an instructional point of view, and from the viewpoint of subject integrity, when you study Geometry in the middle of an Algebra course. The analogy may be somewhat over-simplified, but it is a little like someone beginning to learn English, and before they reach a reasonable level of mastery in the structure and syntax of the language, we introduce them to a study of Classic Literature. They are just not ready for that yet.

Of course, all of this would be irrelevant if Algebra were taught analytically, without dependence on rules and shortcuts. If students were taught the “why” of algebraic principles, less repetition and practice would be necessary, and Algebra could be studied in one school year. Then, the two “halves” would truly make a “whole”.